The weather in Patagonia this year has been more like the "Old Patagonia".  In recent years there have been periods of extended good weather that, according to the long time Patagonia climbers, were uncharacteristic of the range.  This year there have been only a few brief 1-2 day good weather windows with lower wind speeds and no precipitation.  In many cases climbers have waited for over a month without getting even one of these marginal opportunities to go climbing.

I arrived on January 4th and within 48 hours caught a cold/flu bug that seems to have infected much of the climbers here in El Chalten.  After skipping one marginal window to recuperate, I felt well enough to take advantage of another window on January 17th when Dan Aylward and I hiked just beyond Niponino in the Torre Valley on an attempt to climb the route Exocet on Cerro Standhardt.  Unfortunately I would soon find out that I really hadn't fully recovered from the persistent bug that infected me.

﻿ Walking up the Torre valley we had spectacular views of Cerro Torre that I climbed via the west face last year with J Mills.  We walked past the usual camping spot at Niponino for another hour to the rock island directly below the Stanhardt Col where we placed our tent on a wind protected ledge with great views of Fitzroy across the valley.  We shared the ledge with two Austrian climbers, Gery and Simon who had just come down from an attempt on Exocet.  The first day of warm sun had loosened the rime ice that had been plastered on the rock walls in all the bad weather creating slides of rime into the chimney system making it impossible for them to climb.  They still had energy to make another attempt so we agreed that they should go first and we left our tent at 2:30AM on Saturday the 18th about 30 minutes behind the Austrians.

Dan and I climbed by headlamp and reached the Standhardt Col in blustery conditions at dawn.  I climbed a short pitch to the top of the large chockstone wedged in the rick just above the Col.

Dan led the crux rock pitch above the chockstone that was a difficult and run out rime covered slab.  There were sections of tenuous friction like climbing with crampons scraping on featureless granite.

After a tension traverse at the top of Dan's pitch we moved on easier ground across a long traverse on  snowfields perched above huge walls that dropped off into the valley below.

At the end of the traverse I led a WI 4 slot up to the base of the Exocet Chimney.  The pitch was pouring with rime ice that was melting off the upper walls and I thought we would be turned back by more of the same when we got to the Chimney.  But when I reached the belay off to the side of the main chimney, the rime stopped.

Dan led the first WI 5 pitch in the Chimney which was narrower and more difficult than I expected.  Unlike waterfall ice climbing, it was hard to move in the Chimney and there was only one way to go.  One section was narrower than the width of our shoulders making it hard to swing our tools into the ice at the back of the chimney.

I led the second pitch in the Chimney but now I realized that I wasn't really over the cold/flu I had been fighting for the past ten days.  I moved slowly, placing too many ice screws low on the pitch so that I didn't have enough at the top and forcing me to run it out to the belay.  At one point I stopped to make a V-Thread cord of rope in the ice so I had some protection to finish the pitch.  As I finished the pitch the Austrians rappelled by after having reached the summit.  I admired their strength and efficiency in getting up the route in this tight window of good weather and conditions.

As Dan climbed up to my belay, I was coughing up phlegm and feeling weak.  When Dan joined me it was 7PM and I felt we were going to slowly, there were still four long difficult pitches above, we could see the wind above us up on the ridge was now raging, and I was sick.  I suggested that in spite of being a few hours from the top that we should go down.  I didn't want to get to the top depleted from being sick and be facing a long unknown descent in the dark with the high winds that were now hitting the mountain. 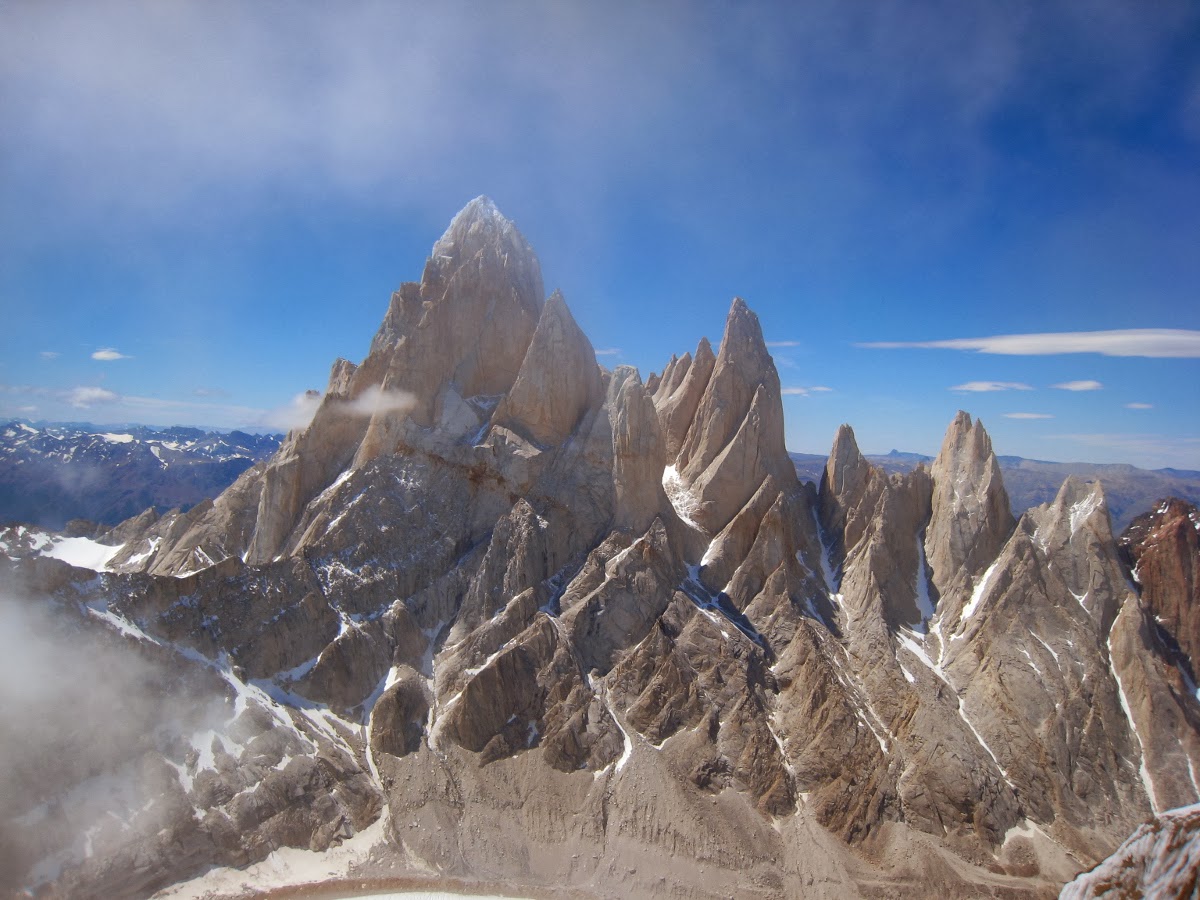 Soon after Dan and I started rappelling it got dark.  But with minimal problems with the rope getting hung up we made the dozen or more rappels by headlamp to get onto the glacier and follow the Austrians tracks to our last rappel over the bergschrund.

We reached our tent around 3AM and three hours later our camp was hit by high winds that signaled an abrupt end to our weather window.  We tried to sleep a bit more, but the severe tent flapping kept us awake so we packed up in the storm and headed down the glacier.

As we walked down the Torre Glacier the wind gusts of up to 100mph would knock us off our feet.  We would have to hunker down low to the ice to wait for a lull between gusts and then run to get as far as we could before being forced to stop again during the next gust.  We eventually got off the glacier and into the forest where we were protected from the wind.  After a leisurely walk on the Laguna Torre trail we reached Chalten in time to order take out pizza and watch the Seattle Seahawks defeat San Francisco and head for the Superbowl.
Posted by Steve Swenson at 8:38 AM