Temperatures cooled off so Rob Smith and I decided to go for another try on Cryophobia.  Kris Irwin was unable to join us this  time so we were without a 4x4 vehicle capable of giving us a short approach by driving up the Waiparous Creek road.  So we drove in my Subaru to the North Ghost and made the long three hour trudge to the climb.

﻿
﻿﻿
We quickly dispensed with the two pitches we climbed the previous week
﻿﻿﻿
﻿
I agreed to lead the ice at the top and Rob led all the difficult mixed pitches.  The third pitch was rated as the crux going over an M8 overhang .

The fourth pitch was still plenty difficult even though it was rated easier at M7.  But the fifth pitch gave us the most trouble and was also rated easier than the third pitch at M7+.  I'm convinced that M7+ is the mixed climbing sandbag rating.
﻿
On the sixth pitch I took over leading.  Above the first bolt I broke a hold with my ice tool and came off onto Rob crampons first.  Fortunately no one was hurt and I went back up and climbed out onto the ice dagger and the fatter Grade 5 ice above.  That was followed by another ice pitch rated 5+ that took us to the top of the climb.  It is a great route.  I would vote Cryophobia as one of the best mixed climbs I've done in the Canadian Rockies!


It was a technical rappel down the climb in the dark given that it is overhung most of the way. Rob went first and on each rappel he had to clip the rope into several intermediate points so he could reach the next anchor and not be way out in space. It was hard for me to un-clip and retrieve those intermediate anchors as Rob pulled me into the wall from below.  After the climb we still had the long three hour trudge back to the car followed by a late night arrival back in Canmore.

Back in the Canadian Rockies

On March 11th I drove back to Canmore as it was still winter and lots of ice climbing still.  Rob Smith came up for Colorado and we spent a couple of weeks climbing together - sometimes with other friends from Canmore.  Rob was very keen to try Cryophobia - a difficult mixed route just right of Hyrophobia in the Ghost River area.  Although temperatures seemed like they might be too warm, we headed in there in Kris Irwin's truck.  A bit of 4x4 with chains on all wheels got us withing a forty five minute walk of the climb.

﻿
Unfortunately, the temps were too warm.  As we climbed the lower two pitches we were getting bombed by falling ice that was melting off the wall above.  We decided to come back when it was colder and rappelled off.  Nearby, Will Mayo, Pat Delaney, John Freeman, and Will Gadd had put up a new route in a cave called Nophobia.  Because we still had plenty of time, we wandered over and spent some time climbing on the first pitch.  The route has an overall rating of M11, and even though the first pitch was not the crux, we couldn't climb it without falling or hanging from the rope.﻿

The temperature stayed warm along with plenty of new precipitation which pushed the avalanche danger up to HIGH in the back country.  So we spent a day in Marble Canyon safe from the bad snow.


On February 23rd Ann and I took the bus from Puerto Natales to Punta Arenas, which for me was coming full circle.  I had started my trip in Punta Arenas, situated on the Straight of Magellan, on December 26th on my way to Antarctica.  This time Ann and I were looking forward to our boat trip the next day to Magdalena Island to see a large colony of Magellanic Penguins.

Magellanic Penguins are native to the Straight of Magellan and Magdalena Island is one of Chile's largest and most important breeding sites.  During peak breeding season on the island (December to February), researchers have recorded over 60,000 breeding pairs of penguins along with other gulls and birds. 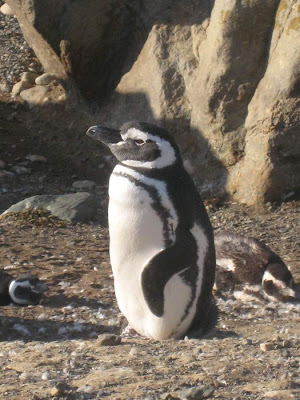 Ann and I rode out to the island in a large Zodiac with about fifteen other tourists.  The island is bare with numerous burrows that the penguins use as nests.  Magellanic Penguins mate with the same partner each year using the same burrow.  When the penguin couples arrive on the island, they are able to find each other because the females can recognize their mates call.

They lay two eggs which incubate for five to six weeks.  The parents take turns brooding on the nest in ten to fifteen day shifts and then take care of the chicks for a month after they hatch.  When a parent is not caring for the eggs or chicks, it feeds in the ocean on cuttlefish, sardines, squid, and krill.  Seals are their primary predators along with sharks and killer whales.

Next our boat took us to nearby Marta Island where there is a large colony of South American Sea Lions.  South American sea lions consume numerous fish, squid, octopus, and penguins.   Mating occurs between August and December and pups are born between December and February. Males establish and defend their territories and their females.  Males keep around three females in their territory, but some can have as many as eighteen.

As our boat headed back to shore, we were fortunate to encounter a school of Commerson's (aka Magellanic) Dolphins.  Commerson's dolphin has a distinctive black and white pattern and is one of the smallest cetaceans.  They are found in inland waters in Argentina and the Strait of Magellan as well as near the Falkland islands.  They feed on small fish, squid and crustaceans.  We got great views of them as they leapt out of the water chasing after our boat .


On February 25th we flew from Punta Arenas and arrived in Los Angeles the next day.  As we walked from international arrivals to domestic departures for our flight to Seattle I knew I was back in the USA when I spotted the airport dog park - complete with a plastic fire hydrant. 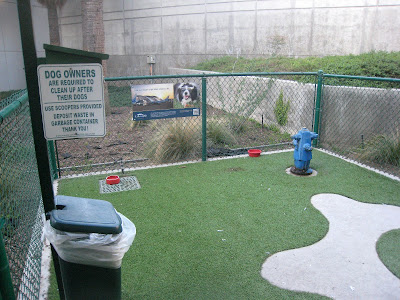 My wife Ann arrived in El Calafate, Argentina, and we took the bus to El Chalten where we spent three days trekking .  But the main goal for us was to go trekking in the Torres Del Paine national park in Chile.  So we took a bus to Puerto Natales and the next day on February 16th we took another bus up to the park.  Our plan was to do the "W" trek, which follows a route shaped like its namesake.  The bottom of the "W" follows a trail that is between the mountains and some very large freshwater lakes.  The legs of the "W" follow trails that go up the valleys between the mountains where you get spectacular views of the granite towers.  There are privately run refugios along the route where you can sleep and buy meals.  Ann and I mostly stayed in the refugios.  But we also did some tent camping that enabled us to split the trek into shorter days and not be forced to walk the long distances between some of the refugios.

We took a shuttle van from where the bus let us off inside the Park to the Refugio Torre Central.  The next day we took a hike from the refugio up the valley that is the eastern leg of the "W".  The goal was to climb to the viewpoint "Las Torres" at a glacial lake below the Torres (Towers) del (of) Paine.  It was a long day that took nine hours round trip from the refugio, but we were treated to the view you see in the photo below.

On February 17th we walked from the Refugio Torre Central to the Refugio Los Cuernos.  The trail took us west along the base of the "W" across the mountain slopes above Lago (Lake) Nordenskjold.  The Patagonian winds kicked in that afternoon with gusts up to 50 or 60 mph that blew Ann off her feet a couple of times.  The refugio was full, but we were able to have our meals there and then sleep in our tent in the forest that was protected from the wind.


The next afternoon we walked a short distance to Campo (Campsite) Italiano and spent the night.  On the morning of February 19th we left our camping gear behind and climbed up the French Valley (the middle leg of the "W") with day packs.  At the head of the French Valley we had lunch and admired this spectacular cirque of granite towers.

After returning to Campo (Campsite) Italiano we picked up our camping gear we had cached there and headed for the Refugio Paine Grande.  The weather was changing with high winds and clouds pouring through the ice formations at the top of Paine Grande.

There had been several fires in the park, all started by back country users, and we reached the burned out area shortly before arriving at the Refugio Paine Grande.

Like the Refugio Torre Central, the Refugio Paine Grande was a large facility serviced by boats coming from the road head on the other side of Lago Pehoe.  We stayed in the refugio and had showers and a nice meal and rested there the following day.

I took a day hike on our rest day south past Lago Pehoe to the Rio Grey.

On February 21st we hiked north along Lago Grey from the refugio towards Grey Glacier, one of the major glaciers draining the Southern Patagonia Ice Field.


We were very fortunate with the weather with good views throughout.  At the end of our trek as we caught the evening boat across Lago Pehoe the clouds descended and it began to rain.