Drive to Nubra Valley and Hike to Base Camp

As many of you may know, Mark Richey, Freddie Wilkinson and I successfully made the first ascent of Sasser Kangri II (7518 meters) in the Eastern Karakoram on August 24th.  I will resume the blog posts that I suspended while we were in the mountains with no internet connectivity.  So stay tuned as I post about our experiences with some photos over the next week or so.  I will start with our trek to base camp.
On Thursday July 7th we drove the six hours from Leh to the Nubra Valley and our road head. The road climbs up and over the Kardung La, an approximately  17,600 foot pass (the Indians claim it is higher than that) that they also claim is the highest motorable road in the world. The road over this high pass is the main access for India to the very northern tip of their country because they can't access it via the Shyok River, the main river basin north of the Kardung La, because it flows west into Pakistan - India's arch enemy.  The Line of Control that separates the two countries in disputed Kashmir is heavily militarized, so the Indians cannot access this area up the valley from Pakistan and going over this high pass is their only access. For several members of our group driving to the pass was their personal altitude record.
Down the other side of the pass and up in the Nubra Valley we stayed at the Rimo Hotel and prepared all our loads for the porters to carry to base camp. On July 9th we left the main road at 10,000 feet and immediately climbed about 2000 feet up a steep arid hillside that placed us high on the south side of the river gorge that we would follow for the next three days to our base camp. 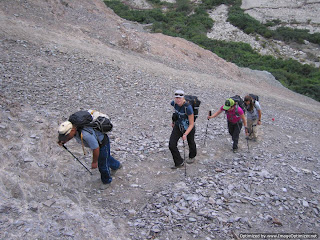 The distance is not all that great, maybe only 10-15 miles, but we would climb to 17,000 feet and we needed to take the time to acclimate to this elevation. At the top of the initial hill we traversed along a couple of miles of very treacherous hiking – steep rocky cliffs that didn't seem all that solid plunging several thousand feet into the river below. 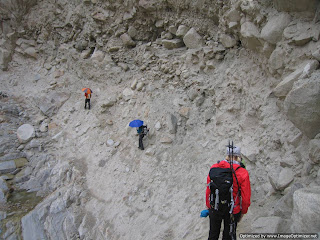 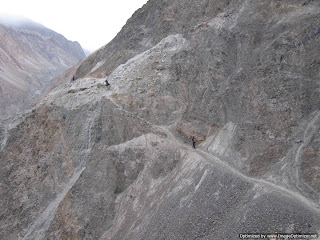 ﻿
Our camp that evening was on a flat dry plan past all the worst part of the trek and the next day we enjoyed a leisurely walk to a nice grassy meadow for our second camp. We would need to spend an extra night here so that our porter loads could catch up to us. 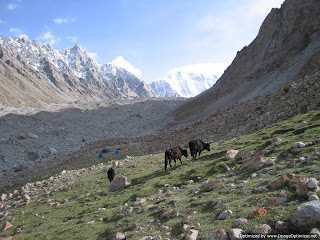 On July 12th we arrived at our base camp, the same one that Mark and I used in 2009 on our first attempt on Sasser Kangri II. It is a beautiful small meadow, unusual for this elevation where we will be spending a lot of time until we leave at the end of August. 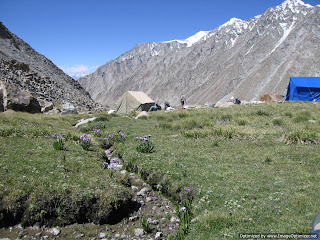