After leaving Wenzhou and the International Outdoor Film Festival in Nanzi River.  Our hosts flew Rufus, Andy, and I to Guilin for three days of climbing at Yangshuo. This region is characterized by Karst towers formed over geologic time from the dissolution of limestone by the rain.  This area would be considered a mature karst landscape because a large amount of bedrock has been removed by this process leaving behind the large towers that are great for climbing.


Yangshuo is about an hours drive from the airport in Guilin and seems to be the center for climbing on the karst towers.

Rufus and I arrived at Yangshuo a day before Andy and our host Amanda (her English name).  I was recovering from a hand injury sustained while crack climbing a few weeks previous so I was limited in what I could do.

There was a vibrant Chinese climbing community here with gear shops and guides who took newcomers to their favorite crags.

It seems like even small towns in China are full of lots of people and Yangshuo was no exception.  It was a busy place with a thriving tourist economy.  But you didn't have to go far outside of town to encounter farming communities whose growing techniques looked like they had not changed in a very long time.

I remained surprised that I didn't see any abject poverty anywhere on this trip similar to other developing or emerging economies.  I never saw a panhandler or beggar.  I don't know if poor people were removed from tourist areas or if things were managed so there was enough to go around.  People seemed well dressed and there was a lot of new construction.

Our last evening in Yangshou we went to the shop where they have fish in tanks that eat the dead skin off of your feet.  It felt weird and ticklish at first but then I sat there for about an hour and the fish removed only a fraction of the dead skin on my feet.  I think I would need a special 24 hour rate to get most of it removed.

I'd like to thank all our Chinese hosts, especially Amanda Lu.  We had a great time at a great event and that was mostly due to the superb organization of it all.

The Walk for Love, Adventure Race, and Floating the Nanzi River

This is a continuation of my recent post on the mountain film festival in China.  Part of the International Outdoor Film Festival in Nanzi River was a charity event called The Walk for Love.  I understood the money was raised to somehow improve water quality.  They certainly need it as many of the waterways I observed were choked with algae.

﻿
There were about 3000 participants in the Walk for Love, which by Chinese standards is small.  But the level of enthusiasm was high.

I was impressed by the level of affluence exhibited by the participants.  The last time I was in a major Chinese urban area was 1990.  Back then everyone seemed poor and they were all wearing Mao suits.


The Walk for Love started at a campground and I was impressed by the expensive equipment displayed by these Chinese car campers. 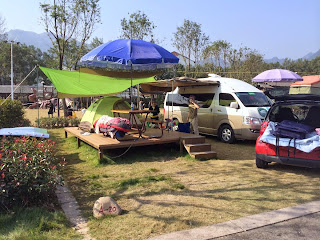 The event was well organized with several aid stations and lots of volunteers.

The locals were pretty excited about having foreign guests and everyone wanted to have their picture taken with us.

﻿
In addition to The Walk for Love, the event had an Adventure Race. It was a 24 hour event that started with a run, then cycling, and finishing with a float down the Nanzi river.


Our hosts took us on a float trip on the Nanzi River on the last day and we had a chance to see some of the adventure racers in their home made rafts.

I've always been amazed at the different types of bathroom facilities around the world.  One of the common differences between what we use in the US and much of the rest of the world is the prevalence of squat toilets.  At the bathroom before we boarded our bamboo rafts, there were universal language signs on the stalls indicating if it was a sit toilet or a squat toilet.


The raft we boarded was pretty rickety and once underway with everyone on board the deck was submerged about six inches.  It didn't matter if it fell apart.  We were wearing life jackets, the river was relatively flat, and the shore was never far away.

﻿
The drivers float the river by poling through the shallow sections.  When it gets deeper they lower a prop attached to a shaft from a small engine and motor along.  After we were dropped off downstream the drivers motor and pull their rafts back upstream to the starting point.


The food in China is quite different from a lot of other countries I've visited and what we have in Chinese restaurants in the US is very Americanized.  At different times we were served bowls of fish heads, chicken heads, chicken feet, small snails where you suck the insides out, pork fat, and small crabs with the guts included.  But for the most part we were served some very excellent food.

Posted by Steve Swenson at 12:20 PM No comments:

In early October, the climbing and post production teams for the film The Old Breed were invited to Wenzhou China for the International Outdoor Film Festival in Nanzi River. Mark Richey and Freddie Wilkinson could not attend, but Rufus Lusk and I decided to go.  My son Jed also came along with me. 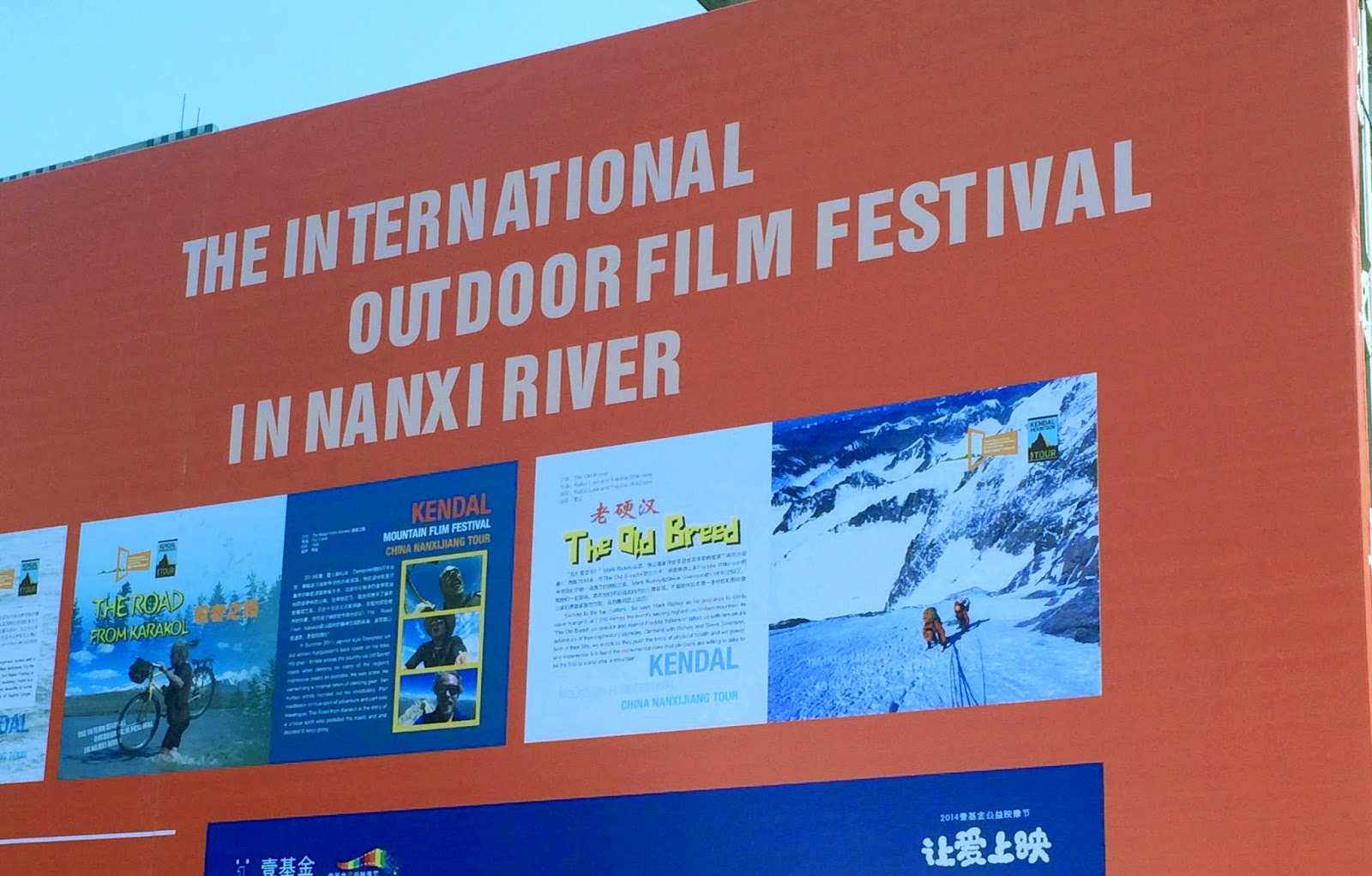 The film festival was on October 24th and we received a rock star reception. We walked up the stairs into the theatre on a gold carpet bordered by red velvet banisters as dozens of Chinese took pictures of us.  It's the closest I'll ever come to being chased by paparazzi.

Inside the theatre we were welcomed by a myriad of festival staff, volunteers, and attendees.

Jed was pleased that they were handing out free beer. 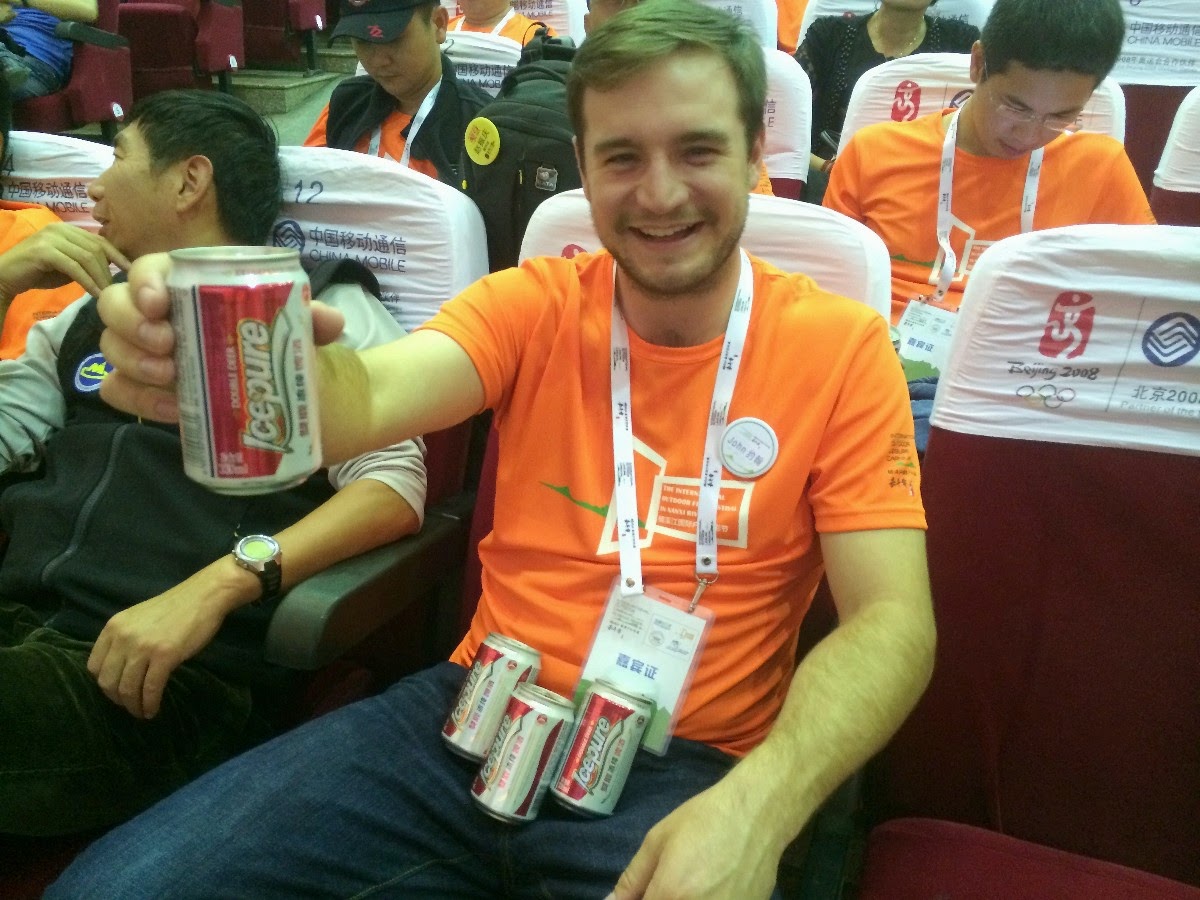 After the film festival, we got a quick tour of parts of the town as we rode back to our hotel in bicycle rickshaws. 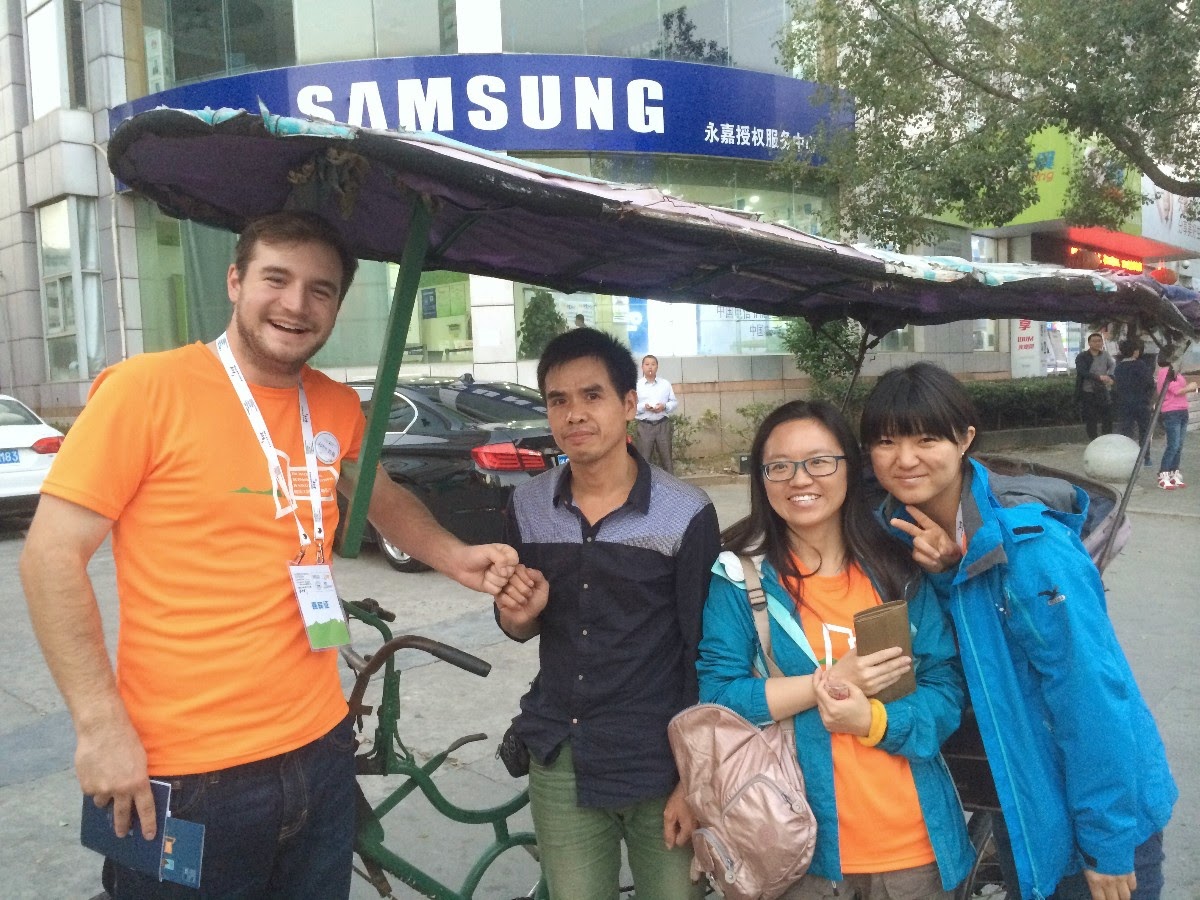 Being an avid golfer, Jed wanted to play a round somewhere on his trip to China so our driver took us up to the Wenzhou Orient Golf and Country Club.
﻿
It was a very nice course, but no one was playing when we were there.  They charged us about $220 USD to play (it cost me $60 to just ride around in the cart).  I don't think this was a special rate for foreigners.  It was an exclusive club and there are a lot of very wealthy Chinese who can afford this kind of recreation.  With a population of 1.36 billion, the top 1% of their earners amounts to 13.6 million people.

They assigned a Chinese caddy/cart driver to us whose English name was Kevin.

Kevin was impressed with Jed's game and asked if he would teach him to golf.

On the next day, Saturday, the festival continued with the Walk for Love, the subject of my next post.

Posted by Steve Swenson at 10:09 PM No comments: