The Piolets d'Or is an award given to a climb(s) the previous year.  An explanation of this award taken from the official website is as follows:

"The purpose of the Piolets d'Or awards is to raise awareness about the year's greatest ascents across the world.  They aim to celebrate the taste for adventure, the bravery and sense of exploration that lie behind the art of climbing in the world's great mountain ranges.

The Piolets d'Or draw their inspiration from mountaineering's rich history.  They are a celebration of a sense of partnership and solidarity, of shared experiences, and reward individual or collective achievement.

In modern mountaineering, questions of style and means of ascent take precedence over reaching the objective itself.  It is no longer a matter of employing huge financial and technical resources (bottled oxygen, fixed ropes, high-altitude porters, so-called 'performance-enhancing' substances…) and large numbers of people to reach the top at all costs.  The Piolets d'Or throw the spotlight on imaginative and innovative new routes, using a minimum amount of equipment, and building on experience." 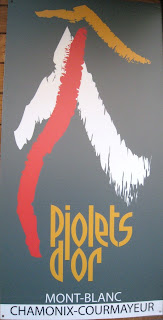 The climb that Mark Richey, Freddie Wilkinson and I did on Saser Kangri II last year was one of six nominated climbs for this award.  It was a huge honor for us just to have been nominated.

The organizers choose a jury each year to select the nominees who come to Chamonix for the event.  At the event, each of the nominees make a presentation to the jury that then chooses a winner(s).  The criteria that the jury uses for selecting the nominees and deciding the winner(s) is:

"The jury judges these ascents irrespective of a climber's nationality and against the following criteria, both on a point-by-point basis and as a whole:


I wasn't very familiar with Robert's accomplishments before going to this event.  But I learned that his major first ascents between 1955 and 1971 (many of which he led) include:
﻿He certainly deserved to be recognized and it was a privilege to meet him.
﻿
This celebration is a big media event in Europe and in the towns of Chamonix (France) and Courmayeur (Italy) where the events associated with the Piolets d'Or are held.
The final evening of the event was held in Courmayeur on Saturday night.  There was a big press conference where the media asked questions of each of the nominated teams followed by a dinner attended by dignitaries from both towns.

After short video presentations of all six nominated climbs, the jury announced that the ascent of K7 West by the young Slovenian climbers Nejc Marcic and Luka Strazar was the winner.  The jury then announced that this year they were giving two awards, with the other for the first ascent of Saser Kangri II by Mark Richey, Freddie Wilkinson, and me.

It was a huge honor to receive this award.  All the climbs were worthy and it seemed quite subjective  to pick a winner﻿ from the six nominated climbs.  For me, the most important thing about the event was participating in a great celebration of mountaineering with wonderful people and making some new friends.
Looking back on the Saser Kangri II climb I've come to appreciate my partners Mark Richey and Freddie Wilkinson even more.  The teamwork we had on the ascent and their tireless efforts to take care of me and organize a rescue after the descent when I got sick are great examples of the true spirit of mountaineering and the meaning behind this award.
Posted by Steve Swenson at 11:32 PM